Deep linking is one of the most underestimated problems to solve on mobile. A naïve explanation would say that given some sort of input, mobile apps can load a specific screen but it only has practical meaning when combined with Universal Links on iOS and App Links on Android. In such cases, the input is a URL that would load a web page on the companion website.
Let’s use an example from Just Eat: opening the URL https://www.just-eat.co.uk/area/ec4m-london on a web browser would load the list of restaurants in the UK London area for the postcode EC4M. Deep linking to the mobile apps using the same URL should give a similar experience to the user.
In reality, the problem is more complex than what it seems at first glance; non-tech people – and sometimes even developers – find it hard to grasp. Loading a web page in a browser is fundamentally different from implementing dedicated logic on mobile to show a UIViewController (iOS) or Activity (Android) to the user and populate it with information that will most likely be gathered from an API call.
The logic to perform deep linking starts with parsing the URL, understanding the intent, constructing the user journey, performing the navigation to the target screen passing the info all the way down, and ultimately loading any required data asynchronously from a remote API. On top of all this, it also has to consider the state of the app: the user might have previously left the app in a particular state and dedicated logic would be needed to deep link from the existing to the target screen. A scenario to consider is when the user is not logged in and therefore some sections of the app may not be available.
Deep linking can actually be triggered from a variety of sources:

It should be evident that implementing a comprehensive and scalable solution that fully addresses deep linking is far from being trivial. It shouldn’t be an after-thought but rather be baked into the app architecture from the initial app design.
It should also be quite glaring what the main problem that needs to be solved first is: the app Navigation.
Navigation itself is not a problem with a single solution (if it was, the solution would have been provided by Apple/Google and developers would have simply stuck to it). A number of solutions were proposed over the years trying to make it simpler and generic to some degree – Router, Compass, XCoordinator to name just a few open-source components.
I proposed the concept of Flow Controllers in my article Flow Controllers on iOS for a better navigation control back in 2014 when the community had already (I believe) started shifting towards similar approaches. Articles such as Improve your iOS Architecture with FlowControllers (by Krzysztof Zabłocki), A Better MVC, Part 2: Fixing Encapsulation (by Dave DeLong), Flow Coordinators in iOS (by Dennis Walsh) got good traction, and even as recently as 2019, Navigation with Flow Controllers (by Majid Jabrayilov) was published.
To me, all the proposals share one main common denominator: flow controllers/coordinator and their API are necessarily domain-specific. Consider the following methods taken from one of the articles mentioned above referring to specific use cases:

With the support of colleagues and friends, I tried proposing a generic and abstract solution but ultimately hit a wall. Attempts were proposed using enums to list the supported transitions (as XCoordinator shows in its README for instance) or relying on meta-programming dark magic in Objective-C (which is definitely the sign of a terrible design), neither of which satisfied me in terms of reusability and abstraction. I ultimately realized that it’s perfectly normal for such problem to be domain-specific and that we don’t necessarily have to find abstract solutions to all problems.

For clarity on some of the terminology used in this article.

NavigationEngine is the iOS module (pod) used by the teams at Just Eat, that holds the isolated logic for navigation and deep linking. As mentioned above, the magic sauce includes the usage of:

NavigationEngine maintains separation of concerns between URL Parsing, Navigation, and Deep Linking. Readers can inspect the code in the NavigationEngineDemo project that also includes unit tests with virtually 100% code coverage. Following is an overview of the class diagram of the entire architecture stack.

While the navigation is powered by a FlowController-based architecture, the deep linking logic is powered by NavigationIntentHandler and NavigationTransitioner (on top of the navigation stack).
Note the single entry point named DeepLinkingFacade exposes the following API to cover the various input/sources we mentioned earlier:

Here are the sequence diagrams for each one. Refer to the demo project to inspect the code.

As mentioned earlier, the important concept to grasp is that there is simply no single solution to Navigation. I’ve noticed that such a topic quickly raises discussions and each engineer has different, sometimes strong opinions. It’s more important to agree on a working solution that satisfies the given requirements rather than forcing personal preferences.
Our NavigationEngine relies on the following navigation rules (based on Flow Controllers):

Note that each one:

This is responsible to keep the underlying state machine and what the app actually shows in sync. Note the goFromHomeToSearch method being verbose on purpose; it takes care of the specific transition from a given state (home).
One level up in the stack, NavigationIntentHandler is responsible for combining the actions available from the NavigationTransitioner starting from a given NavigationIntent and creating a complete deep linking journey. It also takes into account the current state of the app. For example, showing the history of the orders should be allowed only if the user is logged in, but it would also be advisable to prompt the user to log in in case he/she is not, and then resume the original action. Allowing so provides a superior user experience rather than simply aborting the flow (it’s what websites achieve by using the referring URL). Here is the implementation of the .goToOrderHistory intent in the NavigationIntentHandler:

Since in the design we make the entire API future-based, we can potentially interrupt the deep linking flow to prompt the user for details or simply gather missing information from a remote API. This is crucial and allows us to construct complex flows.
By design, all journeys start by resetting the state of the app by calling goToRoot. This vastly reduces the number of possible transitions to take care of as we will describe in more detail in the next section dedicated to the underlying state machine.

As you might have realized by now, the proposed architecture makes use of an underlying Finite State Machine to keep track of the state of the app during a deep linking journey.
Here is a simplified version of the state machine configurations used in the Just Eat iOS apps. 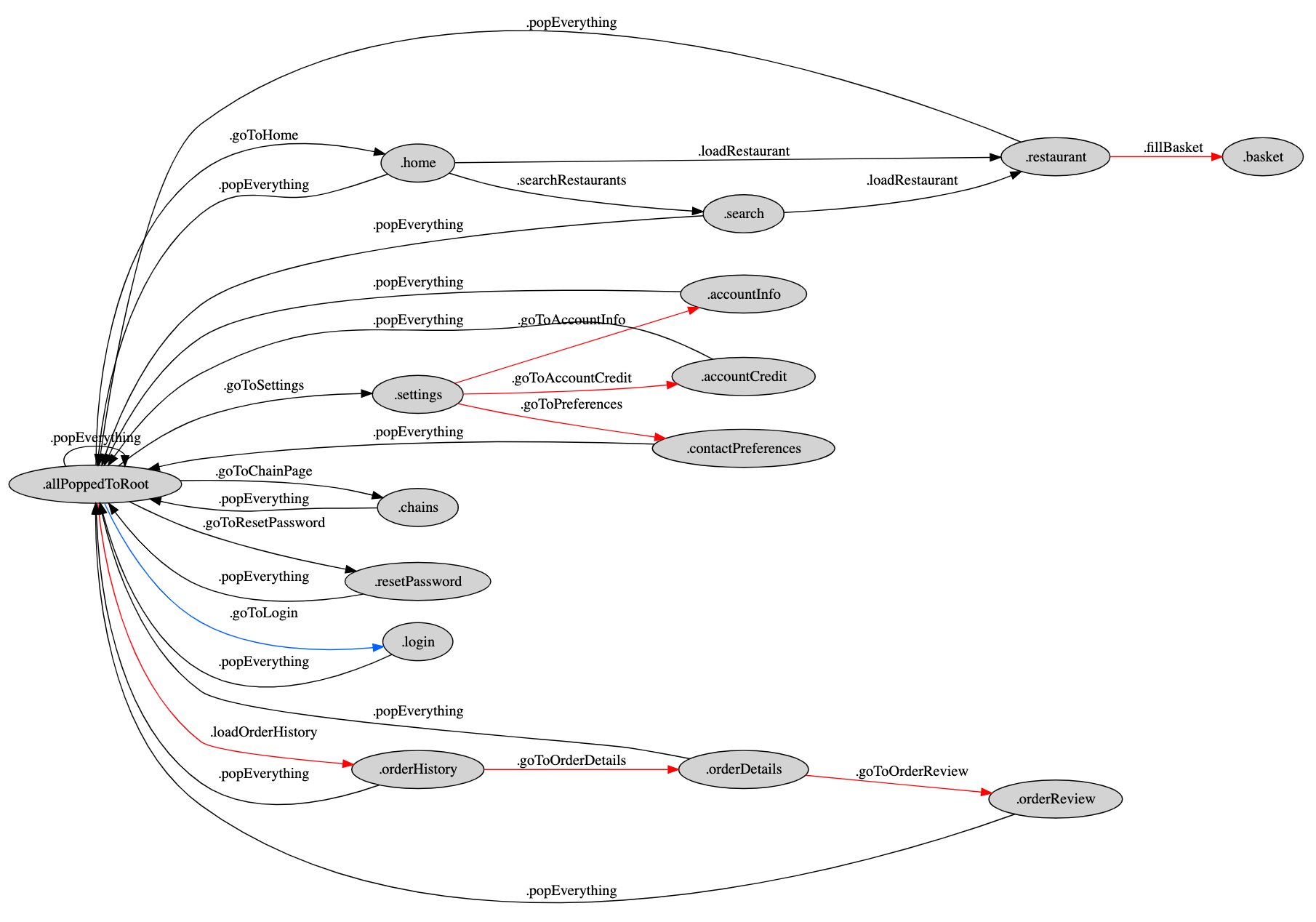 In the picture, the red arrows are transitions that are available for logged in users only, the blue ones are for logged out users only, while the black ones can always be performed.
Note that every state should allow going back to the .allPoppedToRoot state so that, regardless of what the current state of the app is, we can always reset the state and perform a deep linking action starting afresh. This drastically simplifies the graph, avoiding unnecessary transitions such as the one shown in the next picture.

Notice that intents (NavigationIntent) are different from transitions (NavigationEngine.StateMachine.EventType). An intent contains the information to perform a deep linking journey, while the event type is the transition from one FSM state to another (or the same).
NavigationTransitioner is the class that performs the transitions and applies the companion navigation changes. A navigation step is performed only if the corresponding transition is allowed and completed successfully. If a transition is not allowed, the flow is interrupted, reporting an error in the future. You can showcase a failure in the demo app by trying to follow the Login Universal Link (https://just-eat.co.uk/login) after having faked the login when following the Order History Universal Link(https://just-eat.co.uk/orders). 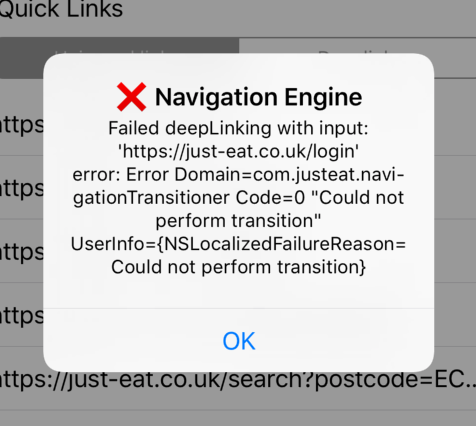 NavigationEngineDemo includes the whole stack that readers can use in client projects. Here are the steps for a generic integration of the code.

N.B. Since a number of tasks are usually performed at startup (both from cold and warm starts), it’s suggested to schedule them using operation queues. The deep linking task should be one of the last tasks in the queue to make sure that dependencies are previously set up. Here is the great Advanced NSOperations talk by Dave DeLong from WWDC15.

To perform internal app navigation via deep linking, the DeeplinkFactory class should be used to create DeepLink objects that can be fed into either handleURL(_ url: URL) or openDeepLink(_ deepLink: DeepLink).

The module exposes a DeepLinkingTesterViewController that can be used to easily test deep linking within an app. 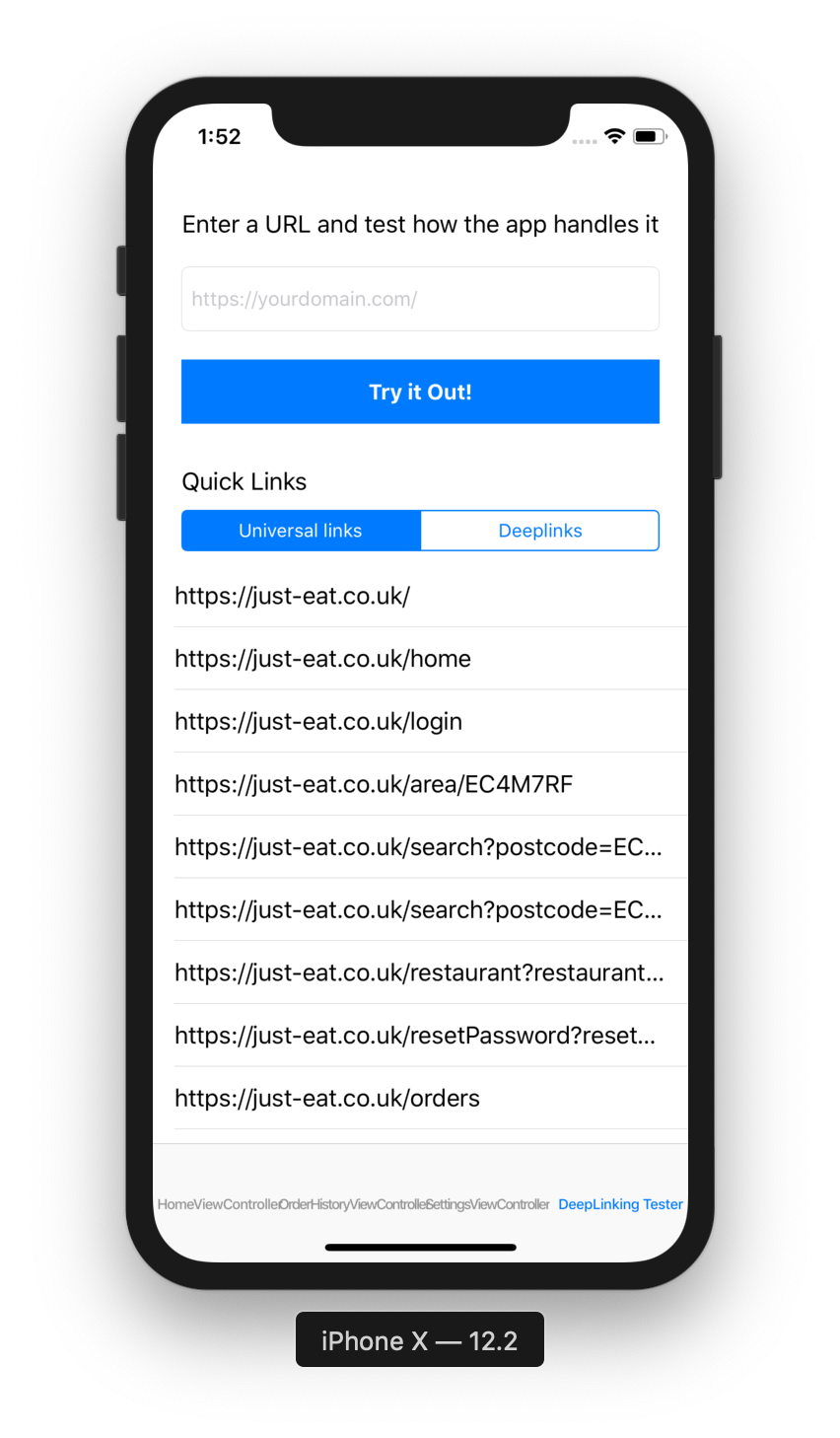 Then feed it to the view controller as shown below. Alternatively, use a storyboard reference as shown in the demo app.

The solution proposed in this article has proven to be highly scalable and customizable. We shipped it in the Just Eat iOS apps in March 2019 and our teams are gradually increasing the number of Universal Links supported as you can see from our apple-app-site-association.
Before implementing and adopting NavigationEngine, supporting new kinds of links was a real hassle. Thanks to this architecture, it is now easy for each team in the company to support new deep link journeys. The declarative approach in defining the API, states, transitions, and intents forces a single way to extend the code which enables a coherent approach throughout the codebase.

Data Ingestion At Just Eat – Part 1: The Concept Out with the old, in with the new! Part 2 — Replacing legacy components without down time